The Art & Ritual of a Chinese Tea Ceremony 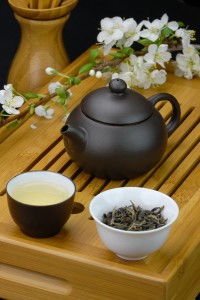 Traditionally called Cha Dao, or the Dao of Tea, it is the harmony of tea, water, utensils, preparation, environment and conversation to create the perfect moment – a moment that can last for hours.

A skilled pourer of tea creates the moment without standing in the middle of it. The moment belongs to the fragrance and taste of the tea, the atmosphere of Cha You, or ‘tea friends’ coming together, a moment outside the hecticness of daily life. However, the art of soaking tea in china is not primarily about creating that moment. It is about the tea itself.

Good tea and an experienced pourer at a Chinese Tea Ceremony sparks spontaneous joy and conversation, a lightheartedness that separates it from the Japanese tea ritual. In Japan, the tea is a way to attaining a certain state; for the Chinese that state is simply part of the experience of tea, it is allowed to flow into the ritual but is not directly sought after.

Over its almost 2,000 known years of history, the ways of preparing and drinking tea have undergone great changes, just as some types of tea have waxed and waned in popularity. There are many varieties of tea bushes, each unique in their own flavors. Today, most tea is loose-leaf tea, separated into three main categories, which are green, wulong (or oolong, literally means black dragon) and red (known as black tea in the west). These three categories represent how the tea is processed, not the tea leaf itself.

Green means the leaf has only been slightly fermented; wulong means it is semi-fermented; and red means the leaf is fully fermented. Thus, any freshly picked tea leaf can be made into green tea, a wulong tea, or red tea. However, certain varieties of leaf lend themselves to one preparation method or another.

While green tea is certainly the most famous of all teas, red tea is probably has the largest global market share and wulongs have the highest quality. The greatest wulongs are grown in the mountains of Taiwan, where the mists, sun and elevation combine to create the perfect climate for semi-fermented tea. The leaves are cared for by generations of tea farmers for whom growing tea is more a way of life than a livelihood.

Today, it is around wulong tea that the greatest efforts are made in the Art & Ritual of Chinese Tea. At various times throughout the year the Oriental Healing Clinic hosts Chinese Tea Ceremonies. Tea pourer is Juanita McLaughlin, who received training in Beijing and with the Association for Traditional Studies here in the US.

Call 303 258 9112 to book a Chinese Tea Ceremony.  We can perform a Chinese Wedding Tea Ceremony, a traditional tea ceremony to help seal business relationships or just for a pleasant afternoon for you and a friend or partner to enjoy each others company, conversation and friendship.

This website uses cookies to improve your experience while you navigate through the website. Out of these cookies, the cookies that are categorized as necessary are stored on your browser as they are essential for the working of basic functionalities of the website. We also use third-party cookies that help us analyze and understand how you use this website. These cookies will be stored in your browser only with your consent. You also have the option to opt-out of these cookies. But opting out of some of these cookies may have an effect on your browsing experience.
Necessary Always Enabled
Necessary cookies are absolutely essential for the website to function properly. This category only includes cookies that ensures basic functionalities and security features of the website. These cookies do not store any personal information.
Non-necessary
Any cookies that may not be particularly necessary for the website to function and is used specifically to collect user personal data via analytics, ads, other embedded contents are termed as non-necessary cookies. It is mandatory to procure user consent prior to running these cookies on your website.
SAVE & ACCEPT